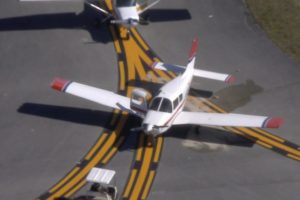 The aircraft Piper PA-28-161 Cadet experienced a loss of directional control and subsequent runway excursion after landing at North Perry Airport (KHWO) in Hollywood, Florida. The plane veered off the runway and struck another plane Cessna 152, which was stationary on an adjacent taxiway. The propeller of the Cessna plane was struck and there was a minor fuel leak from the Piper PA-28-161 Cadet plane.

Aviation officials said two student pilots were involved in the crash. There were no reported injuries to the three occupants onboard both aircraft.

Cessna 152 is an American two-seat, fixed tricycle gear, general aviation airplane, used primarily for flight training and personal use. It was based on the earlier Cessna 150, including a number of minor design changes and a slightly more powerful engine running on 100LL aviation gasoline. The Cessna 152 has been out of production for more than thirty years, but there are still a large number of aircraft in flying condition. Due to the aircraft’s durability, many examples have flown more than 15,000 hours and over 60,000 landings and are still in regular use for flight training.