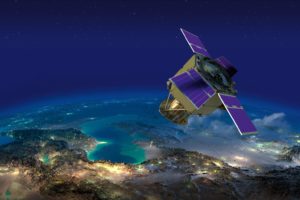 The engineers of the United Arab Emirates (UAE) were the first in the Arab world to develop and assemble a satellite without resorting to foreign specialists. The ready spacecraft, called KhalifaSat, was inspected by the Vice President and Prime Minister of the UAE, the ruler of Dubai, Mohammed bin Rashid Al Maktoum.

“Emirates engineers were the first to design a satellite without foreign support in the Arab world”, he said during a visit to the Mohammed bin Rashid Space Center, where the device was designed. “This achievement shows the high level of ability of the Emirates youth who mastered space technologies, knowledge and experience accumulated by our scientists and engineers has laid a solid foundation for the scientific and technological development of the UAE. We are confident that the national space industry will continue its growth and growth so a key component of our economy”, added he.

KhalifaSat is the third satellite developed by the employees of the Dubai Center. Before that, the DubaiSat-1 and DubaiSat-2 were successfully tested and launched. At the moment, the first 100% satellite created in the emirate passes the final test tests and by the end of the year will be launched into the near-earth orbit by the carrier rocket Mitsubishi Heavy Industries Rocket – H-IIA from the cosmodrome in Japan.

The emirate satellite, which took more than four years to build, is equipped with an advanced global positioning system, an automatic control program. One of his tasks is to take photos from space and transmit visual information to the Earth in real time.

The first UAE satellite was launched in 2009, and in 2014 a national space agency was created. The state program, approved in 2015, includes the participation of the emirates in the study of Mars. The project foresees the launch of the Hope ship in 2020 to study this planet, and the surface of Mars it should reach by the year 2021 – the 50th anniversary of the creation of the UAE.