Passengers may carry a small suitcase and will have to watch a safety video before taking off, just like it happens on airplanes.

UNITED STATES – If you are travelling to New York, you are interested in knowing this. Uber will expand its operations to the skies of the Big Apple, where its users can hire helicopter trips to the John F. Kennedy International Airport through the application.

The company announced its Uber Copter offer ensuring that trips to and from Lower Manhattan will be available to all Uber users starting October 7. Uber already provided this possibility to all its premium members in June.

The trip, which takes about eight minutes, will cost between 200 and 225 dollars per person (3,900 and 4,400 Mexican pesos), and will include ground transportation at any end of the trip.

Passengers may carry a small suitcase and will have to watch a safety video before taking off, just like it happens on airplanes.

Uber prices are very similar to those of competitors such as Blade, which offers a flight to JFK from Manhattan for 195 dollars. However, these services do not offer ground transportation at the final destination.

Uber says the service seeks to reduce travel times, but when Reuters tested Copter on Wednesday, a journey from its office in Midtown to the airport took 70 minutes, including a subway part and two Uber services to and from the helipad.

That is the approximate time that a normal taxi with moderate traffic would have taken.

Uber helicopter flights are operated by HeliFlite Shares, a licensed firm based in New Jersey. For now, Uber trips taking passengers to the Manhattan heliport will be available only to the southern tip of the island.

However, it could gradually expand the pick-up area in Manhattan, said Eric Allison, head of Elevate, the company’s air services program.

“Helicopters are expensive and will be a premium product, but we believe they are capable of offering a fairly accessible entry point with Uber Copter,” Allison said in an interview on Wednesday.

JFK is one of the largest airports in the country and car journeys from congested Manhattan can last between one and two hours, while public transportation can take between 50 and 75 minutes.

Given the growing concern about congestion and vehicle emissions, Uber expects its project to pave the way for Uber Air, a futuristic taxi service that will seek to transport passengers in “vertical take-off and landing” electrical devices. 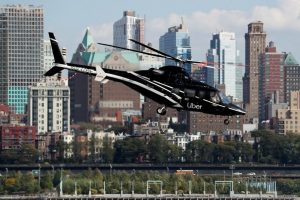 Users would have to take trips from the top of designated buildings.