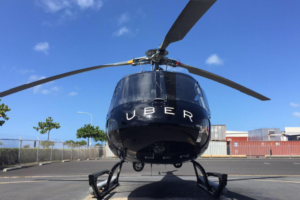 The Uber charter helicopter services have seen a major upsurge in large metropoles with overcrowded traffic and wealthy customers, mostly in Asia. A reservation for such a vehicle, as well as a regular car, can be made using a smartphone application.

In Bangalore, a city with more than 12 million inhabitants in southeastern India, Agostino Fernandez flies over the city and reaches Kempegauda International Airport in less than half an hour – a quarter of the time that usually takes him to the road.

“This is a much better way than a regular car or taxi, because it takes time. And in a city like Bangalore, which is called the green capital for parks and gardens, the aerial view is also very beautiful”, said Agostino Fernandez.

From New York through Bangalore to Jakarta – these services in congested cities have developed significantly over the past years.

Southeast Asia and its submerged metropolis are an “important experimental laboratory”, explains Sam Helman, General Director of Bell Helicopter. This can be applied in other cities and countries in Asia Pacific.

Recently, the same service was offered in Jakarta, one of the cities with the largest congestion in the world.

The company offers transportation from the city center to Sukarno-Hata International Airport for 20 minutes against 6 million rupees (350 EUR). This is well above the cost of a taxi whose service costs an average of between 16 and 24 EUR, but the time it takes is a lot because the car can take from 1 to 4 hours.

However, helicopter travel prices are out of the reach of most residents of Jakarta, where the minimum wage is just over 200 EUR.