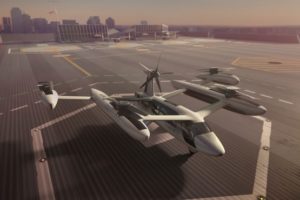 The US technology giant Uber Technologies resumed its first competition to launch its flying taxi project in non-US country after apparently delaying its launch in Dubai earlier this week. UberAIR, as the service will be known, aims to launch demonstration flights in 2020 and paid intra-city operations in 2023.

“Last year Uber named Dallas and Los Angeles to be the first US cities to start the service and is now looking for a third, international metropolis to take part in the project”, said the company product manager Jeff Holden.

The company said it would look at cities with more than 2 million people, scattered neighborhoods, an airport at least one hour from the city center, and who want to support joint travel efforts.

Earlier, Uber announced Dubai for the third city, but this week it said it has resumed its selection process to include other cities that meet most of the criteria to show how flying taxis can help ease urban congestion.

“Dubai has previously shown interest in Uber’s vision, but we are expanding the competition amid interest from other cities”, said the spokeswoman for the company, adding that the talks with Dubai continued.

Uber aims to accelerate the development of a new on-demand electric air taxi industry that customers could order via a smartphone, similar to the way it promotes ground tax alternatives when it first launched its service in 2011.

In Los Angeles, Uber introduced how future taxis would look like semi-helicopters, helicopters with futuristic lines. These are prototypes that do not yet exist. The company sees these machines as a possible decision to unleash the traffic in megacities such as Los Angeles, known for its hellic traffic jams. Just as the skyscrapers lightened the cluster of residential and commercial areas on the ground, UberAIR. wants to raise public transport in the sky.

The San Francisco-based startup said he was not interested in tax cuts in city selection, but would work with local authorities who would seek to put the service on the market as quickly as possible.