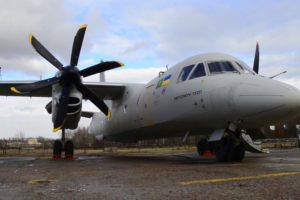 Ukraine and Saudi Arabia launched its first joint project for multi-functional lightweight transport aircraft Antonov An-132D. The aircraft was made by Ukrainian manufacturer of airplanes Antonov in cooperation with King Abdulaziz City for Science and Technology (KACST) and Taqnia Aeronautics. Saudi companies expect that in the future this partnership will allow them to enter the market of passenger aircraft. However, this will happen not earlier than in 20 years, while the main focus now is on transport airplanes.

According to the representatives of Antonov, the project, created on the basis of the An-32, was the first full-fledged experience of the company in international cooperation: the aircraft is equipped with the Pratt & Whitney PW150A engine, Honeywell avionics was Honeywell and integrated air systems by Liebherr-Aerospace Toulouse.

The total cost of development work under the contract is 116 million USD, of which 40 million USD were invested by the Saudi side. According to the data published by Taqnia Aeronautics, 50% of the intellectual property of An-132D will belong to KACST.

The prototype of the aircraft was officially shown in December 2016, and on March 2017 the plane made its first flight. Earlier it was reported about signing a memorandum on the intention of joint production of 80 An-132 aircraft for Saudi Arabia. Some aircraft will be produced in Ukraine, but at the same time in Saudi Arabia will be created capacity for the production of this aircraft and components in the kingdom. The decision on whether a firm contract for 80 aircraft will be signed will be taken after the delivery of the first sample.

At the same time, it was announced that in the next 10-15 years it is planned to produce about 300 aircraft of this type. The announced catalog value of the aircraft is 30 million USD. The sales will be conducted by both the Antonov State Enterprise and the partners of Saudi Arabia. The representative of KACST, Khalid Abdullah Aldkheem, noted that each of the parties has its own connections and experience to offer the aircraft on the market. However, specific details of further commercial interaction are not yet disclosed.

The representatives of Saudi Arabia count on orders from both state structures and oil companies of their country, and on interest from other Arab states of the region. The head of Taqnia Aeronautics, Ali Al-Ghamdi, said during the presentation of the aircraft that the interest from the Arab States to this plane is sufficient.

It is assumed that the aircraft will be assembled both in Kiev and in Saudi Arabia, where the assembly line will be created in 2020-2022. The first 20 aircraft can be manufactured in Kiev, but already in 2018, the cooperation of Arab companies on the components of the Armed Forces with Ukrainian partners will begin. In particular, according to the representative of KACST, in Saudi Arabia, will be produced the elements from composite materials, while Kiev will be responsible for metal components.

The airplane Antonov An-132D will have payload capacity of 9.2 tons, the speed is 550 km/h and flight range of 1,270 km with the maximum load. According to the estimates the flight hour cost will be around 2,000-3,000 USD. Its competitors can be considered Airbus C295 and Leonardo C27J Spartan.