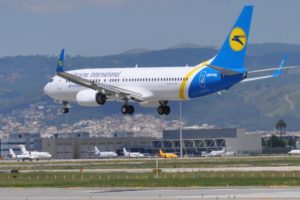 Ukrainian airlines increased passenger transportation volumes by 36.7% in January-July 2017 to 5.817 million people. According to the press service of the Ministry of Infrastructure of Ukraine, international traffic increased by 38.4% and amounted to 5.298 million people.

Passenger traffic through Ukrainian airports increased by 32.6% and amounted to 8.995 million people. The passenger flows in international traffic grew by 34.3% to 7.937 million people.

During January-July 2017, Ukrainian airlines carried 52,200 thousand commercial flights (an increase of 22.8% compared to the corresponding period of 2016), including 44,0000 international flight, representing a growth of 20.8%.

Ukraine International Airlines expecting to grow by 25% to 26% in 2017, and by at least 15% per annum over the next several years. Transit traffic, which now accounts for half of airlines’ overall traffic, will continue to drive most of the expansion as growth opportunities in the local Ukrainian market remain relatively limited.