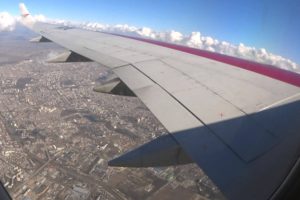 The Administrative Court of the Kyiv region imposed a fine of over 10 million hryvnia (about 380,000 USD) on the Russian airline, which carries out daily flights to the Crimea. This is the first court decision to prosecute a particular Russian airline for flights to the peninsula. The name of the airline was not disclosed.

“The decision of the Administrative Court of the Kiev region satisfied the claim of the prosecutor’s office to recover from the Russian airline, which carries out daily flights to the temporarily occupied territory of the Crimea, more than 10 million hryvnia”, said the press-released of the Prosecutor’s Office of the Autonomous Republic of Crimea

The prosecutor’s office explained that the intruder airline did not pay money for the received air navigation services in the international airspace over the Black Sea within the Simferopol region. In addition, the department noted, within the framework of international legal assistance, the judicial bodies of the Russian Federation were brought to trial. In particular, they say in the prosecutor’s office, the Moscow Arbitration Court carried out the order of the Ukrainian court and handed the defendant a copy of the ruling on the beginning of the trial and the statement of claim of the prosecutor to the airline representatives.

“Proper notification of the offending airline about the requirements of the prosecutor’s office of the autonomy gives the Ukrainian side the opportunity to launch a mechanism for collecting these funds from the debtor in the territory of the Russian Federation”, said the department representative.

After the coup in Kiev in February 2014, the authorities of the Crimea and Sevastopol decided to hold a referendum on reunification with Russia. In the voting, which took place on March 16 same year, more than 80% of eligible voters took part. For reunification with Russia voted, respectively, 96.7% and 95.6% of the inhabitants of Crimea and Sevastopol.

On March 18, the Russian president signed an agreement on the admission of the Republic of Crimea and Sevastopol to the Russian Federation, and on March 21 the document was ratified by the Federal Assembly. Despite the convincing results of the referendum, Kiev refused to recognize the Crimea as part of Russia.