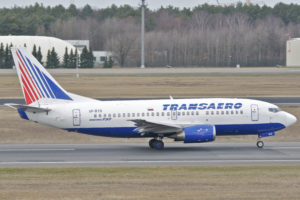 Passenger aircraft Boeing 737 belonging to the bankrupted Russian airline Transaero is listed for sale in Ukraine. The corresponding announcement is published on the website of OpenMarket, which belongs to the state enterprise of the Ministry of Justice of Ukraine “System of electronic trading of seized property”.

At the moment the liner is in Kiev. The auction is scheduled for June 4, the starting price of the lot was estimated at 35.9 million hryvnia (about 1.4 million USD).

It is noted that the aircraft was arrested in 2017.

Earlier it was reported that Transaero sued McKinsey company that had helped with its anti-crisis plan.

Transaero was a Russian airline. It operated scheduled and charter flights to over 150 domestic and international destinations. Its main hubs were Moscow-Vnukovo Airport and Saint Petersburg Airport with further bases throughout Russia. Transaero filed for bankruptcy on October 1, 2015, and announced that it would cease all operations by December 15, 2015. However, Russian authorities revoked its operating license on 25 October 2015.