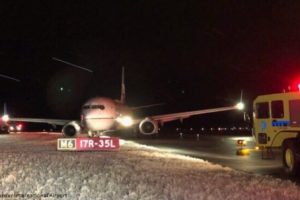 United Airlines Boeing 737-824, performing flight N87507 from Tucson to Denver veered off taxiway ending up halfway in snow. The aircraft landed successful at the airport, but due to strong snow fall the nose and right landing gears slid and ran into the soft ground. All the 91 passengers on board of the United Airlines Boeing 737-824 were disembarked at the taxiway and transported to the terminal by bus.

There were no reported injuries or casualties during the incident. The rescue teams and ambulances were sent at the scene to ensure that all the passengers were in good health.

The root cause of the accident is under investigation. The facts around the veer off the taxiway is not yet clear, but the rescue teams were sent at the scene to the tow the aircraft back to the taxiway and then to the terminal. The inspection of the aircraft is scheduled for later today.

The Boeing 737 is a short- to medium-range twinjet narrow-body airliner. The aircraft has superior reliability, fuel efficiency and high-value returns operators require in today’s competitive market. Its exceptional versatility and lower maintenance and operating costs provide a competitive edge regardless of business model or market.