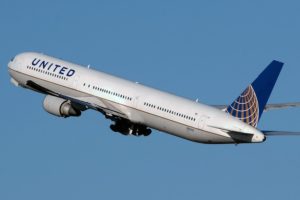 United Airlines Boeing 767 landed by emergency on Heathrow Airport in London, after a number of passengers complained about feeling light headed and sick with nausea. The aircraft was en route from Munich (Germany) to Newark (USA), but on 180 miles west of London, several epople on board complained for feeling sick. The pilot diverted to London, where landed safely about 45 minutes later.

Medical Services entered the aircraft and checked the complaining people. One passenger was taken off the aircraft for more serious treatment. A few minutes later all the people on board were disembarked and underwent medical checks.

The aircraft was removed from service and all the passengers were rebooked for another flights.

The cause of the illnesses on board of United Airlines’ Boeing 767 is under investigation. According to preliminary information there was a problem with ventilation.

The Boeing 767 is a mid- to large-size, mid- to long-range, wide-body twin-engine jet airliner built by Boeing Commercial Airplanes. It was Boeing’s first wide-body twinjet and its first airliner with a two-crew glass cockpit.