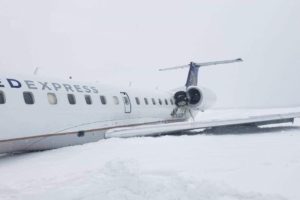 CommutAir plane Embraer ERJ-145XR, which was performing United Express flight 4933, suffered a runway excursion after landing at Presque Isle-Northern Maine Regional Airport in the US.

The aircraft departed Newark-Liberty International Airport in New Jersey on a domestic flight to Presque Isle with 28 passengers and 3 crew. The pilot aborted the first approach and landed during the second attempt, but slid off the right side of the runway. One of the undercarriage legs separated and became embedded between the fuselage and the engine. The nose section of the aircraft Embraer ERJ-145XR sustained serious damage.

There were no casualties during the accident, but preliminary information suggests that one crew member and three passengers were injured.

Emergency teams responded immediately to the scene of the accident. They assisted the passengers and crew, bussing all to the terminal. The injured people were taken to the local hospital.

The icy runway and the snowfall might be the main cause of the accident, but the investigation is underway.