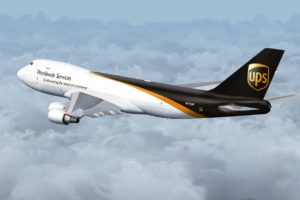 The company UPS announced the order of 14 cargo aircraft Boeing 747-8F and four Boeing 767 for capacity expansion on the background of a rapid increase in demand for air transportation of the company. The new aircraft will complement the existing fleet.

The aircraft will be delivered on an accelerated basis in addition to the 14 cargo aircraft of the Boeing 747-8F, which the company ordered as early as 2016. All 32 aircraft will be delivered before the end of 2022, after which the total load capacity of the UPS fleet will increase by more than 4,000 tons. The company’s international fleet includes more than 500 own and rented aircraft. In 2017, UPS received 3 new cargo airplanes Boeing 747-8F.

“Our shipments of airmail within the United States reach record levels, and the international segment of UPS has increased export shipments by more than 10% for four consecutive quarters”, said the chairman and CEO of UPS, David Abney. “To meet this high demand, we continue to invest in expanding the fleet, providing our customers with much-needed access to markets in all regions of the world”, added he.

“Noting the 30th anniversary of UPS Airlines, we see that the demand for our air transportation services has reached unprecedented heights,” said UPS Airlines president, Brendan Canavan. “The new cargo airliners will allow us to increase the number of aircraft on the routes and thereby create a cascading effect, which will result in the growth of capacity on regional routes throughout the world”, added he.

“UPS has successfully taken advantage of all the capabilities that the Boeing 747-8F provides”, said the CEO of Boeing Commercial Airplanes, Kevin McAllister. “We are delighted with how efficiently UPS uses planes in its operations, and are very pleased that the company decided to replenish its fleet with Boeing 767 airliners”, added he.