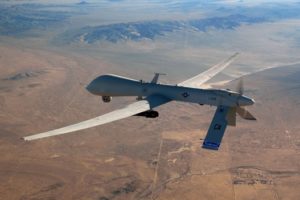 The US Air Force Command decided to retire all the MQ-1 Predator drones, which are in service since 2005. The last flight in the US Air Force Predator will be held on March 9, 2018, after which the US military will use only drones MQ-9 Reaper for strikes. At the same time, MQ-1 contract flights in the Middle East will be ordered by private military companies until December this year.

The development of the Predator was conducted in the second half of the 1980s. In 1994, the first flight was carried out by the reconnaissance version of the device – RQ-1. Reconnaissance Predator has been actively used by the military in Afghanistan since 2001. In 2002, the US Air Force tested the first shock versions of the vehicles and shortly thereafter changed the designation of the UAV from RQ-1 to MQ-1.

The length of the Predator is 8.20 m, the wing span is 16.80 meters, and the height is 2.10 meters. The device with a maximum takeoff weight of 1.02 tons with speed up to 217 km/h and being in the air for up to 24 hours. The range of the UAV over the radio channel is limited to 1,100 km, but using the satellite control system is determined only by the fuel reserve. The MQ-1 is equipped with two suspension points for air-to-surface missiles and a multispectral guidance and reconnaissance system. The calculation of one device consists of two people – a pilot and operator of sensors and weapons.

In total, for the entire time in the US were collected 360 drones Predator. These vehicles were used in several military conflicts and operations, including in Iraq, Yemen, Libya, Syria, Somalia and the Balkans.

Earlier, using the MQ-1 Predator drones, the US Army refused, considering these devices morally obsolete. In 2009, the US Army began to receive MQ-1C Gray Eagle drone unmanned aerial vehicles, which represent a profound modernization of Predator. In particular, these devices are equipped with satellite control systems, have a maximum take-off mass of 1.6 tons and are equipped with four suspension points for missiles or light bombs.