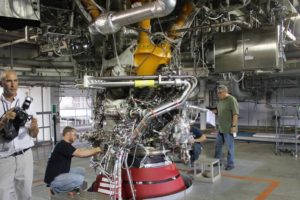 The US company Aerojet Rocketdyne received an order from the Pentagon’s Advanced Defense Development Agency (DARPA) to conduct a demonstration test of a hybrid hypersonic propulsion system based on a turbojet engine. Such engine will have to disperse the prospective aircraft from zero to more than five Mach numbers (6,200 km/h).

Today, the creation of hypersonic aircraft is associated with several difficulties. One of the main is the creation of an engine that could accelerate such an aircraft from zero to the speed of hypersound. The hypersonic is considered a speed exceeding the speed of sound at least five times. Today the existing different types of engines can operate only in its relatively narrow range of speeds and universal propulsion system does not exist yet.

Thus, two-circuit jet engines installed on fighters, because of their design features, can not accelerate the aircraft faster than 2.2 Mach number. At the same time, working prototypes of hypersonic ramjet air-jet engines begin to operate stably at flight speeds of more than four Mach numbers when it becomes possible to maintain supersonic airflow through the power plant. The theoretical speed limit for a hypersonic engine is 24 Mach numbers.

The new American hybrid engine will be able to operate in the entire range of speeds possible for a hypersonic aircraft. The engine is developed by Aerojet Rocketdyne since 2012 and will not differ in principle from the schemes of combined power plants created by other developers. It will combine a turbojet engine and direct-flow supersonic and hypersonic air-breathing propulsion systems, united by a common air intake and a nozzle.

According to this scheme, in particular, the US-based Lockheed Martin company is creating the SR-72 for hypersonic drone. The same scheme for his combined hypersonic installation was chosen by the Chinese Research Institute of Machinery of Beijing. The difference between the Aerojet Rocketdyne engine will be the use in its design of the existing standard turbojet engine such as the Rolls-Royce F405 Adour.

Under the terms of the DARPA contract, the American company will have to find such technical solutions that will increase the upper limit of the turbojet engine speed and lower the speed limit of the ramjet air-jet plants. In addition, within the same project, a combined-engine temperature control system must be developed and tested at all stages of the flight. It is expected that the first tests of the common air intake and nozzle and the integration of the turbojet engine will begin in 2018.

Last December, Aerojet Rocketdyne received a contract from the US National Energy Technology Laboratory to develop a new gas turbine power plant based on a rotary detonation engine. The work, which will result in the creation of a prototype of a new plant, is scheduled to be completed by mid-2019. According to preliminary estimates, a new type of gas turbine engine will have at least five percent better performance than conventional gas turbine engines.