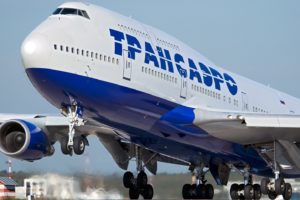 US court of the Southern District of Florida ordered the shareholder of Transaero Airlines to disclose assets, satisfying the claim of MTS Bank to the owner and former chairman of the board of directors Alexander Pleshakov and company Sky Ocean International. Pleshakov is the beneficiary of the latter and court ordered to give testimony and documents to the MTS bank within 28 days.

Information is needed by MTS Bank to participate in the Transaero bankruptcy process and the planned processes in Russia and the British Virgin Islands to repay the debt, distort the Transaero accountability, legalize illegally obtained revenues and etc.

Transaero was the second largest air carrier in Russia after Aeroflot, but in the fall of 2015 ran out of funds, in October was revoked the operator’s certificate and in December 2016 the company declared bankruptcy and the court introduced a monitoring procedure.

At the end of May, Transaero creditors registered claims for 216 billion rubles. The airline owes money to 23 banks, as debt to MTS Bank amounts 4.1 billion rubles. In the event of the sale of Transaero’s assets, the creditors will return about 2 kopeks for each ruble of debt.

“We took measures to find the company’s assets and information about transactions that were not made in Russia by Mr Pleshakov and the management of Transaero”, said the head of MTS Bank, Ilya Filatov. “Based on the information received, we will seek repayment of the debt to the bank, including outside the jurisdiction of Russia. Until now, no creditor has stated that it will recover the debt of Transaero from its shareholders”, added he.

Until now, no creditor has stated that it will recover the debt of Transaero from its shareholders. The bank was able to sue in Florida, because Sky Ocean is registered in this state and acquired real estate for millions of dollars on Riviera Beach. According to the creditors Transaero falsified reporting for obtaining loans with underestimated losses in 2012 and 2013 to 15.3 billion rubles. In the total their true size the company disclosed only in the statements for 2014. Moreover made several in-family transactions. The Sky Ocean International’s real estate in Riviera Beach has already been sold. MTS Bank wants to find out where the money from the sale went, what transactions were made between the members of the Pleshakov family and their companies, including where the Transaero dividends were reinvested. In addition, MTS Bank wants to receive information from respondents on dividends, loans, accounts, real estate, salaries and intangible benefits received from Transaero by the defendants, as well as Olga Pleshakova and Tatyana Anodina (Pleshakov’s wife and mother, who also were shareholders of Transaero).