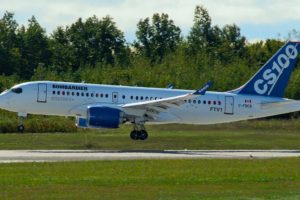 The US Department of Commerce found the Canadian aircraft manufacturer Bombardier guilty for price dumping. The aircraft manufacturer Boeing opened dispute against their Canadian rival for illegal lowering of prices for C Series airplanes. The investigation was launched in the spring of this year. Boeing has complained the C Series airplanes were dumped below cost in the US market last year while benefiting from unfair subsidies. The US aircraft manufacturer states that Bombardier is selling each C Series jet to Delta for 19.6 million USD. The jet’s list price is nearly 80 million USD, but steep discounts are common.

Canada and Bombardier denied all charges into the dispute.

The US Department of Commerce, after studying the circumstances of the case, took the side of Boeing and found the Bombardier guilty for price dumping. The department said it imposed a steep 219.63% countervailing duty on each Bombardier commercial jet after it made a preliminary finding of subsidization.

“The US values its relationships with Canada, but even our closest allies must play by the rules”, said the US Commerce Secretary, Wilbur Ross. “The subsidization of goods by foreign governments is something that the Trump Administration takes very seriously, and we will continue to evaluate and verify the accuracy of this preliminary determination”, added he.

Bombardier is a Canadian multinational aerospace and transportation company.