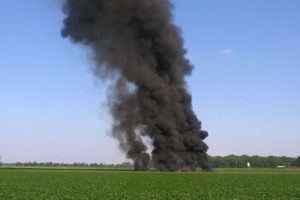 An American military airliner KC-130 crashed in the southern state of Mississippi. All 16 people on board died. The US Marine crops aircraft took off from Marine Corps Air Station Cherry Point, North Carolina, but several minutes later crashed in LeFlore County near the highway. The root cause of the accident is under investigation.

“The identities of the service members whose lives were lost in this tragic accident are being withheld to allow time for their loved ones to be notified”, said the Clark Carpenter from US Marine Crops. “While the details of the incident are being investigated, our focus remains on providing the necessary resources and support to the family and friends of these service members as they go through this extremely difficult time”, added he.

The search of the area continues despite the fall of the night. The debris of the airplane is scattered within a radius of several kilometers, with bodies of victims being seen on a highway more than a kilometer and a half from the site of the crash.

There is no evidence of injured people on the ground.

The causes of the crash are clear, but according to eyewitnesses the airplane was flying zigzag, smoke coming from one of its engines. After that it lost height and crashed on the ground.