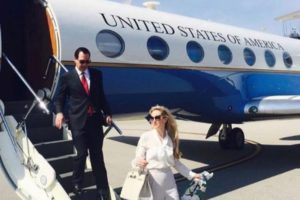 The American public organization Citizens for Responsibility and Ethics in Washington (CREW) has demanded the justification of the flight of US Treasury Secretary Steven Mnuchin on a government plane during an eclipse on August 21.

“The requested records would shed light on the justification for Secretary Mnuchin’s use of a government plane, rather than a commercial flight, for a trip that seems to have been planned around the solar eclipse”, said the statement of American public organization Citizens for Responsibility and Ethics in Washington.

It is noted that the trip to Kentucky, which, as the public organization assumes, was committed by the minister and his wife in order to observe the solar eclipse. CREW announced on its website that it was requesting “copies of all records concerning authorization for and the costs” of the Kentucky trip.

Mnuchin’s wife, actress Louise Linton, drew attention on social media to the trip, during which the secretary gave remarks alongside Senate Majority Leader Mitch McConnell (R-Ky) at a local event. Linton posted a photo with a description of her designer outfit that included the government plane in the background, which “set off a public firestorm”, according to CREW.

The public organization also demanded information about the legality and costs of moving Mnuchin on a government plane since he became head of the US Treasury.