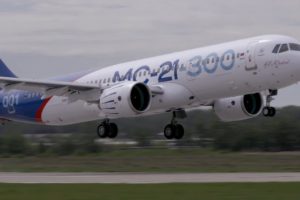 The US sanctions against Aerocomposite JSC (part of UAC) and the technology company ONPP Tekhnologiya Romashin (Rostec) threatened the creation of a composite “black wing” for the current key prospective project in the Russian civil aviation industry – Irkut MC-21. Two top managers of the industry told about the difficulties with the supply of imported composites.

According to the information, a number of components for composites used for the wing and part of the fuselage came from the United States and Japan, but recently, under pressure from Washington, the shipments were suspended. We are talking about the components of the production of American Hexcel and Japanese Toray Industries.

Irkut MC-21 should become the first medium-haul aircraft created in post-Soviet Russia, and the elongated composite wings are one of its competitive advantages. It increases the efficiency of the car and increases the width of the cabin compared to counterparts from Boeing and Airbus. Three prototypes Irkut MC-21-300 are now ready, but the fourth aircraft is in an assembly stage. The whole project was estimated at 438 billion rubles.

“The remaining stock of composites is designed for six airplanes, and ways to solve the problem are being discussed”, says people from the industry. “Now you have to take either Chinese composites that are twice as thick and heavier, or wait for Russian enterprises to create something similar”, added they.

Theoretically, the Elabuga plant of composite products can master the specialization, but it will be necessary to carry out R&D and find a machine-production park and this will lead to a shift in deadlines to the right at least until 2025.