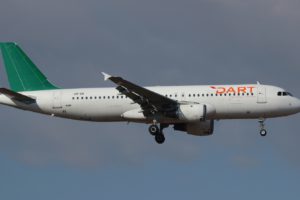 Ukrainian airline Dart Airlines has not yet commented on the information on its inclusion in the US sectional list.

“I am not competent in this matter, now there is no commercial director, she is on sick leave. I can not say anything to you”, said the company’s secretary.

The new sanctions list also included seven Iranian citizens serving in ITSec, whom the US accused of organizing cyber attacks, which resulted in at least eight major financial institutions in the United States. The list also included Iranian company SABA on charges of supporting Tehran’s nuclear program and cooperation with the IRGC.

Iranian airline Caspian Airlines got on the sanctions list in 2014 on charges of transporting fighters of the Islamic Revolution Guards Corps and illegal transfer of weapons from Iran to Syria.

Iraqi Al-Naser Airlines was included in the list of anti-Iran sanctions in 2015 for the transfer of at least eight Airbus A340 and one Airbus A320 to the Iranian company Mahan Air.