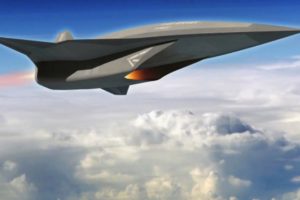 Vice President of Aeronautics Lockheed Martin, Orlando Carvalho, speaking at the International Aerotechnical Congress and Exhibition, assessed the progress of the United States in creating a hypersonic drone SR-72.

“I believe that the United States is on the verge of a hypersonic revolution”, said Carvalho. The words of Vice President Lockheed Martin edition associated with the tests of the prototype SR-72.

The prototype of hypersonic drone was tested in late July, the flight of the aircraft was accompanied by two supersonic training aircraft Northrop T-38 Talon. The tests were held at the training ground in Palmdale (USA), where the headquarters of the Skunk Works team from Lockheed Martin, working on the aircraft, is located.

According to the plans of Lockheed Martin, the prospective hypersonic drone will be able to fly at speeds from zero to six Mach numbers (up to 6,900 km/h). In terms of its size, the full-scale SR-72 should be comparable to the SR-71. It is believed that a prospective drone can be used for reconnaissance, the high speed of the apparatus will not allow the enemy to intercept him.

A full-scale working version of SR-72 is planned to be created by the end of 2020.

To date, a speed record of 3.2 Mach numbers in a direct flight belongs to the US reconnaissance aircraft SR-71 Blackbird, removed from service in 1998.