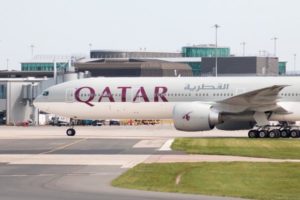 USA lifted the ban on the transport of personal electronic devices in the cabin of flights of Qatar Airways. According to the statement of the airline, it is now allowed to bring electronics on board on all flights to the US from Doha, as the Qatari airport Hamad International Airport has complied with all new US security requirements.

US transport officials were due to visit Qatar Airways, Emirates and Turkish Airlines on July 5 to check the latest measures were in place, a spokesman for the U.S. Transportation Security Administration (TSA) told Reuters on Wednesday.

“With immediate effect, all personal electronic devices can be carried on board all departures from Hamad International Airport to destinations in the United States”, said official statement of Qatar Airways.

Earlier, the removal of this ban was announced by Emirates airlines Etihad and Emirates.

In March, the United States imposed the ban on flights originating at 10 airports in eight countries – Egypt, Morocco, Jordan, the United Arab Emirates, Saudi Arabia, Kuwait, Qatar and Turkey – to address fears that bombs could be concealed in electronic devices taken aboard aircraft.