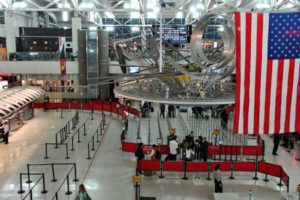 USA will not prohibit carrying laptops in the cabin of the airplanes, but tighten passenger checks. The enhanced security measures will take effect in three weeks and will affect the flights to the United States from other countries. The new rules, which were proposed by the US Minister of National Security John Kelly, suggest an increase in the time of checks of passengers and their gadgets. The purpose of tightening inspections is to prevent the carrying of bombs and explosives on board. However, the government will remove the prohibit for carrying laptops in the salon of the aircraft.

The new security measures will be daily experienced by 325,000 passengers of approximately 2,000 flights arriving to the US. They will affect 180 airlines and 280 airports in 105 countries.

The US Minister of National Security John Kelly expressed the hope that the airlines will fulfill these requirements, and added that the restrictions will not be the final step in strengthening security measures.

The Association of Airlines for America has already expressed regret that the authorities did not discuss new measures with carriers, while this would avoid disruptions in the schedule and operation of airlines and trouble for passengers, which are now very likely.

In March, the US banned the transportation of electronic devices larger than the smartphone in salons on flights from 10 airports in Turkey, Morocco, Jordan, Egypt, the UAE, Qatar, Saudi Arabia and Kuwait. This ban remains until its expiration date, but will not be extended.