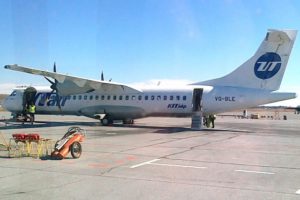 UTAir aircraft ATR-72 veered off the runway at Tomsk airport in Russia and stopped on soft ground. The airplane with 62 passengers on board was performing flight from Surgut to Tomsk and landed in good weather, but at uncertain circumstances left the runway. There were no reported injuries among the passengers, who were evacuated and transferred by bus to the terminal. The aircraft ATR-72-212A did not suffered damages, but was unable to perform the further sectors of the flight to Krasnojarsk and Irkutsk.

A replacement aircraft was sent to resume the flight schedule of the troubled one.

The local authorities and Rosaviatsia initiated investigation for the root cause of the accident. According to preliminary information it happened after human mistake and wrong handling technique employed by the first officer and a wrong intervention by the captain to correct the handling problem. During landing the aircraft crossed the runway center line and pilot was trying to return it back at the center but without success.