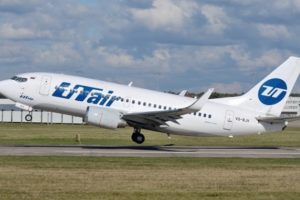 UTAir Boeing 737-500 stopped takeoff during accelerating at Pulkovo Airport’s runway 28R after receiving indication of a system failure. The airplanes accelerating to takeoff from St Petersburg to Moscow, but rejected maneuver at high speed of about 90 kts. The pilot activated the emergency brakes and succeeded to slow safely. The airplane returned to the airport and all the passengers were disembarked. There were no reported injuries and damages to the airplane.

The airport authorities ordered safety inspection and was estimated that aircraft will remain on land.

The flight from St Petersburg to Moscow was canceled and all the passengers were rebooked to another flights.

Boeing 737-500 (registration VP-BYM) is short- to medium-range, narrow-body jet airliner. The -500 series was offered, due to customer demand, as a modern and direct replacement of the 737-200. The fuselage length of the -500 is 47 cm longer than the 737-200, accommodating up to 140 passengers. Both glass and older style mechanical cockpits arrangements were available. Using the CFM56-3 engine also gave a 25% increase in fuel efficiency over the older -200s P&W engines.