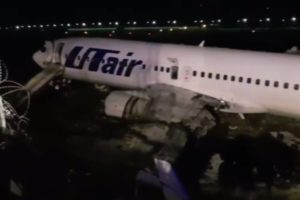 Siberian airline Utair’s plane Boeing 737-800 caught fire after runway excursion during landing in the Russian city of Sochi. The aircraft, carrying 164 passengers from Moscow, landed in Sochi, but suffered runway runway excursion, slipped into a river where the wing and its landing gear had been destroyed and the left-hand CFM56 engine ignited.

All the passengers and the crew were evacuated without reported casualties. However, 18 people were injured, including three children.

During the accident, an airport employee died of a heart attack.

All the injured people were transported to the local hospital for medical treatment. None of them has life-threatening injuries.

An investigation for the root cause of the accident was initiated.

The meteorological data from Sochi airport indicates that it had been experiencing thunderstorms and rain, and wind gusts exceeding 40 kts. Weather data shortly after the landing indicates a wind direction from the south-west, suggesting a tailwind for aircraft landing on runway 06.