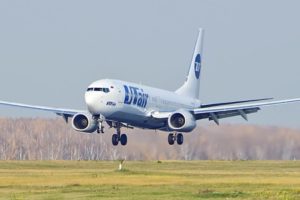 UTAir’s aircraft Boeing 737-800 abandoned climbing after takeoff from Sochi Airport, due to problem with the landing gear. The aircraft was en route to Moscow Vnukovo airport with 176 people on board, but the pilot decided to divert to Krasnodar, which was located on 100nm north of Sochi, where the aircraft landed safely on runway 05R about 65 minutes after departure. No injuries or damages were reported during the emergency landing. All people were transferred safely to the airport, while the aircraft was detained for inspection.

UTAir reported that aircraft suffered a bird strike on departure, which damaged a sensor affecting the gear retraction.

A replacement Boeing 737-800 was sent and all the passengers were transferred to it. The aircraft reached Moscow with a delay of about 7 hours.

The Boeing 737 Next Generation, commonly abbreviated as 737NG, is the name given to the −600/-700/-800/-900 series of the Boeing 737 airliner. They are short- to medium-range, narrow-body jet airliners powered by two engines. Produced since 1996 by Boeing Commercial Airplanes, the 737NG series includes four variants and can seat between 110 and 210 passengers.