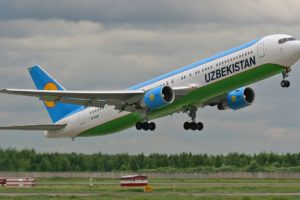 Uzbekistan Airways carried more than a million passengers for the first half of 2017, which amounted to 104.3% by the corresponding period of 2016, reported the press service of the National Air Company. The largest growth was reported to the directions of the far abroad by 111.3%, while in near abroad it was 109.8% and on domestic directions is 83%.

In addition, the air carrier transported more than 24,000 tons of cargo, which is 26.4% more compared to the same period last year. The airline also exported 100%, doubling sales of foreign exchange earnings – 219.5% of the forecast.

The national airline “Uzbekistan Airways” was established on January 28, 1992 by the decree of the former president of the country, Islam Karimov.
Today Uzbekistan airways carries out regular flights to more than 40 cities of the world. The other day the plane of the airline successfully carried out the first transatlantic non-stop flight from New York to Tashkent.

Earlier the Uzbekistan Airways carried out the first direct non-stop flight on the route Tashkent-New York-Tashkent. The Boeing 787 Dreamliner returned from New York and landed in Tashkent airport on July 28. The flights will be operated on Thursdays from July 27 to October 27 this year. The time of direct flights on the Dreamliner from Tashkent to New York is 12 hours, while one hour less when going back.