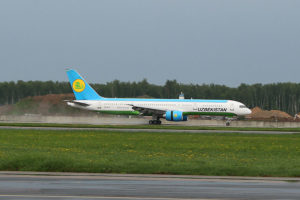 Uzbekistan Airways intends to transfer its Moscow flights from Domodedovo Airport to Vnukovo. The transition will take place on October 28.

“Starting from October 28, 2018, all Uzbekistan Airways flights from Uzbekistan to Moscow will be transferred from Domodedovo airport to Vnukovo airport. The change of the airport will not affect the flight schedule”, said the airline in statement. “The Vnukovo airport has the best transport accessibility, which is provided by land urban transport. A night bus and the high-speed train Aeroexpress are also running here. It has been planned for 2019 to build a section of the Kalininsko-Solntsevskaya subway line to the airport”, adds the company’s statement.

The Vnukovo international airport is one of the largest air transport complexes in Russia. Every year, the airport serves more than 170,000 flights of Russian and foreign airline companies. The airport’s destination network covers the entire territory of Russia, as well as the countries of the former Soviet Union, Europe, Asia and Africa.

The Vnukovo aerodrome complex has two modern runways with lengths of 3500 m and 3060 m, the airfield acceptance rate amounts to 58 takeoff and landing operations per hour. The Vnukovo passenger terminal with a total area of about 300,000 square meters is able to provide a throughput capacity of up to 35 million passengers per year.