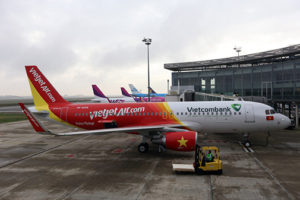 There were no reported injuries during the landing and no damages of the aircraft. All the passengers were disemberked at the terminal and rebooked to another flight on replacement Airbus A321-200, which reached destination with delay of 3 hours.

The local authorities initiated investigation from the root cause of the accident. The inspection of the troubled aircraft was conducted.

The airline reported the crew received a warning indication and returned to Ho Chi Minh City. The indication was subsequently identified false.