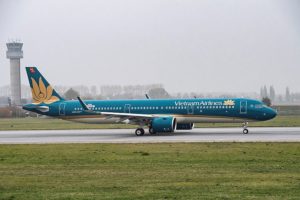 Vietnam Airlines handed over the first narrow-body A321neo airliner as part of an order placed by the airline for twenty aircraft of this model.

Airbus A321neo is the largest aircraft of the A320 family with wider aisles and armchairs, the capacity of which is 203 passengers with a configuration of 8 seats in the business and 195 seats in economy class. In pursuit of the highest standards of service, Vietnam Airlines is constantly modernizing its fleet, which is currently one of the youngest and most modern in Asia. Today’s event marks the first step in the implementation of the diversification strategy of the airline’s narrow-body fleet through the inclusion of new models.

“Vietnam Airlines honors the combination of the highest level of comfort and exceptional economy of the Airbus A321neo, which reduces fuel consumption by 20%. The aircraft is equipped with a wireless entertainment system, which noticeably diversifies the flight experience”, said the President and CEO of Vietnam Airlines, Duong Tri Thanh. “The delivery of this airliner is a significant event for the company, which marks the constant efforts of Vietnam Airlines to modernize the narrow-body park in accordance with the high 4-star standard. We are confident that the Airbus A321neo will provide passengers with our growing route network in Vietnam and Asia with a completely new level of comfort”, added he.

Vietnam Airlines was the first airline in Vietnam to introduce advanced wireless on-board entertainment system technology, offering a wide selection of movies and music tracks that were previously available only onboard the wide-body Boeing 787 and Airbus 350. The passengers can use personal electronic entertainment devices to connect to the on-board network. Vietnam Airlines will launch this service on board the A321neo from December 1, 2018.

The new generation of engines and the special configuration of the wing, allow the Airbus A321neo to achieve unsurpassed fuel efficiency, reducing environmental impact by reducing noise and CO2 emissions.