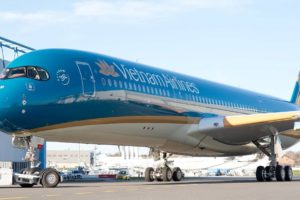 Vietnam Airlines went public on the Ho Chi Minh Stock Exchange on May 7, listing more than 1.4 billion shares. The ceremony was attended by the heads of the Commission for the Management of State Capital (CMSC) and the State Securities Commission.

Ho Chi Minh Stock Exchange approved the placement of 1,418,290,847 shares of Vietnam Airlines worth over 600,000 USD with a nominal value of 0.43 USD. On the first day of trading, taking into account the base price of 1.74 USD per share, which makes the market capitalization of Vietnam Airlines of 2.5 billion USD, which is the largest indicator among companies listed on the Ho Chi Minh Stock Exchange at this time.

“Placing on the Ho Chi Minh Stock Exchange is an important milestone in the history of Vietnam Airlines, and this step will not only significantly expand opportunities for attracting investment but also strengthen our commitment to improving the liquidity of stocks HVN and maximizing the shareholder value of the company”, Chairman of the Board of Directors of Vietnam Airlines, Pham Ngoc Minh.

Brand Finance estimates that Vietnam Airlines is valued at 416 million USD and is among the top ten most valuable trademarks in Vietnam. In the first quarter of 2019, Vietnam Airlines reported an increase in total revenue by 4.3% compared to the same period last year, receiving a consolidated profit before tax of 64.5 million USD, which is 45% of the annual plan.

Vietnam Airlines is the flag carrier of Vietnam. The airline was founded in 1956 and later established as a state-owned enterprise in April 1989. Vietnam Airlines is headquartered in Long Bien District, Hanoi, with hubs at Noi Bai International Airport and Tan Son Nhat International Airport. The airline flies to 64 destinations in 17 countries, excluding codeshared services.