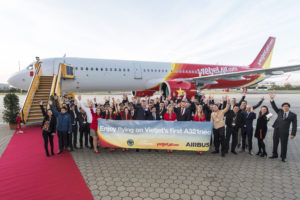 The Vietnamese airline Vietjet ordered 50 Airbus A321neo aircraft, following the memorandum of understanding signed at the International Air Show in Farnborough last July. This deal, worth around 6.5 billion USD based on the list price of the A321neos, is one of the largest since the airshow

The purchase agreement was signed by the President and Chief Executive Officer of Vietjet, Nguyen Thi Phuong Thao, and the Chief Commercial Representative of Airbus, Christian Scherer, in Hanoi at the presence of Vietnamese Prime Minister Nguyen Xuan Phuc and French Prime Minister Edouard Philippe.

After signing a new purchase agreement, the number of planes of the A320 family ordered by Vietjet increased to 171, of which 46 have already been delivered.

The newly ordered Airbus A321neo planes are expected to be delivered between 2020 and 2025. The carrier, which leads the domestic market with a 45 percent share, expects to receive 30 new aircraft and “retire” 10 each year between 2020 and 2025 to keep its fleet young.