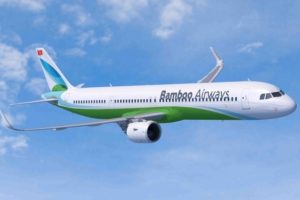 The Vietnamese company FLC Group has signed a Memorandum of Understanding with Airbus on purchasing up to 24 A321neo aircraft for Bamboo Airways. The Memorandum was signed today in Paris by the Chairman of the FLC Group, Trinh Van Quyet, and the Chief Commercial Airbus Officer, Eric Schulz, during the official visit to France of the General Secretary of the Central Committee of the Communist Party of Vietnam, Nguyen Phu Trọng.

“We are proud that the A321neo has been selected by FLC Group”, said Eric Schulz. “This decision once again underscores the position of the A321 as the aircraft of choice in the mid-market segment with its additional capacity and the very lowest operating cost. Vietnam is one of the most vibrant economies in South East Asia and we are proud to play a key role in helping to develop the air transport system in this fast-growing market”, added he.

FLC Group is one of the largest conglomerates in Vietnam and is involved in a wide range of businesses including real estate development, hotel construction and management, financial services, and mining. Bamboo will in particular serve destinations where FLC Group has heavily invested in tourism infrastructure.

Airbus A321neo family is a development of the A320 family of narrow-body airliners. They are essentially a re-engine; neo stands for new engine option, with a choice of CFM International LEAP-1A or Pratt & Whitney PW1000G engines. Airbus A321neo has lengthened fuselage variant and structural strengthening in the landing gear and wing, increased wing loading and other minor modifications due to higher MTOW.