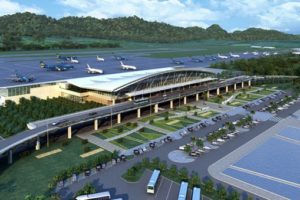 Vietnam’s Van Don International Airport in the northeastern province of Quang Ninh will enter in service at the end of December. According to the project’s management board, they have finished 95% of the total construction of the airport. They expected to complete construction and installation of the whole project in October.

Currently, the provincial administration, together with investors, is preparing documentation and conducting the last formal checks before opening the airport. According to the plan, from October 15 to 30, the state officials will conduct a preliminary acceptance test of the facility.

Construction on Van Don International Airport started in 2015 with total investment of 330 million USD. Located in Doan Ket Commune in Van Don District, the airport covers 288 hectares and is the first in Viet Nam to operate under the build-operate-transfer (BOT) model. It will have support facilities, a two-module terminal and functional areas. A cargo terminal is expected to be built by 2030 with a capacity of at least 51,000 tonnes.

The terminal of the new airport is made in the form of a red vault, the design of which is inspired by the sail. It is planned that the airport will handle 2.5 million passengers a year.