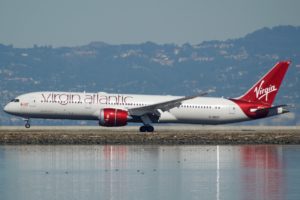 It is noted that at an altitude of about 11 kilometers, the Boeing 787-9 Dreamliner hit the altitude jet stream, due to which it was able to reach a speed of 800 mph (1285 km/h), while at this altitude the speed of sound is 1062 km/h, and the usual speed of such an airliner is 561 mph (902 km/h). This was in part due to extremely strong tailwinds.

Nevertheless, despite this acceleration, the plane arrived in London only 48 minutes before the scheduled time.

Later, the pilot of the aircraft, Peter James, wrote on Twitter that he had never met such a fair wind in his 25-year career.

“The jet stream is so strong over the US right now… that Virgin Atlantic Flight 8 from LAX to London is whipping above Kansas at a ground speed of 758 mph”, tweeted he prematurely. “Almost 800 mph now never ever seen this kind of tailwind in my life as a commercial pilot !! (200 mph tailwind)”, added he.

Transatlantic flights have long taken advantage of jet streams to save time. Pilots will often request particular routes to make the most of any forecast jet streams.