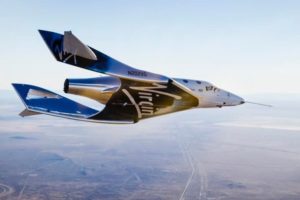 The American company Virgin Galactic successfully conducted the next test of its tourist suborbital spacecraft SpaceShipTwo model Unity. The flight took place in the sky over the Mojave desert in the state of California. During the tests, the ship was raised in the air on a special carrier aircraft. After the separation of SpaceShipTwo, the pilots switched on rocket engines for a while. After that, the device was planned for Earth, made a soft landing.

The company specified that this is the 13th test flight of Unity. Judging by the photos posted by the company on Twitter, the flight from the launch pad was observed by the founder and chairman of the board of directors of Virgin Galactic Richard Branson.

The Unity model was introduced in February last year, its first test flight took place on September 8th. The space ship replaces the crashed in October 2014 in the Mojave Desert previous model called Enterprise. According to the conclusions of specialists who studied the circumstances of the state of emergency, one of the causes of the Enterprise disaster during the test flight was the pilot’s mistake. As a result of the incident, one of the testers was killed, another was injured.

The Scaled Composites Model 339 SpaceShipTwo (SS2) is an air-launched suborbital spaceplane type designed for space tourism. It is manufactured by The Spaceship Company, a California-based company owned by Virgin Galactic. SpaceShipTwo is carried to its launch altitude by a Scaled Composites White Knight Two, before being released to fly on into the upper atmosphere powered by its rocket engine. It then glides back to Earth and performs a conventional runway landing.