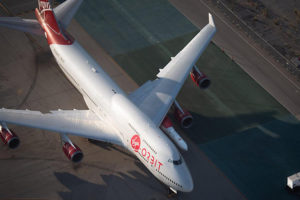 The American company Virgin Orbit conducted the first flight tests of a modified Boeing 747-400 aircraft with LauncherOne, which will be used to put small satellites into orbit. According to the Virgin Orbit report, the plane flew with a rocket 21.3 m long, which is attached at special pylon under the left wing. The flight of the aircraft with a booster rocket lasted 80 minutes and was recognized as completely successful.

The flights of planes with rockets attached at special pylon, fuel tanks or containers with equipment are carried out as part of tests for aerodynamic influence and weight distribution. First, experts check how the additional load affects the aerodynamic characteristics of the aircraft, its handling and fuel consumption. After a series of such flights, the aircraft begins to test the discharge of the load from the pylon in the air. So experts check how the change in mass distribution on the airframe affects the controllability and aerodynamic characteristics of the aircraft.

The first three flights of a Boeing 747-400 aircraft by Virgin Orbit, nicknamed Space Girl, with the suspension system for the two-stage LauncherOne installed under the wing, took place in April of this year. At the beginning of November, the aircraft performed a series of runs on the runway with a LauncherOne mass-dimensional model attached on a pylon. The first flight with a mock rocket took place on November 18, 2018 at the airport in Victorville, California.

During the first flight tests with the launch vehicle, the Space Girl crew checked the aircraft’s behavior during takeoff, low speed flight and landing. Specialists evaluated not only the controllability of the aircraft, but also the interaction of the onboard systems with the missile suspension control systems. In the near future, the aircraft will perform another series of flights with LauncherOne without resetting the launch vehicle, and then proceed to discharge flights. According to the plans of the Virgin Orbit, for the first time the launch vehicle will launch the satellite into orbit in 2019.

LauncherOne development has been underway since 2008. This will be a two-stage rocket, the body of which is planned to be made almost entirely of composite materials. The rocket will be able to output a payload weighing up to 200 kilograms to a sun-synchronous orbit. Initially, the aircraft was considered the carrier for the rocket – the White Knight Two air launch platform, but in 2015, Virgin One decided to replace it with a modified Boeing 747-400.

It is assumed that the launch of satellites into orbit using a launch vehicle and an air launch platform will significantly reduce the cost of space launches. In June 2015, Virgin Orbit signed a contract with the British OneWeb consortium for 39 LauncherOne launches with communications satellites that will provide global Internet coverage. Under the contract, launches should be made in the period from 2017 to 2019.