While everyone was in the reheated one, the passengers of Volaris flight 794 experienced a complex situation for an hour and that is that the aircraft of this company had to return to the AICM (International Airport of Mexico City Benito Juarez) due to a “possible bomb threat“.

According to La Jornada , the plane of flight 794 – which departed from CDMX bound for Tuxtla Gutierrez , Chiapas – returned to the AICM for a safety review.

The information was confirmed in a statement by the company, which took the opportunity to ensure that customers and the aircraft had returned to CDMX without any failure.

Already in the details, Volaris reported that there were 142 passengers and seven crew members on the plane . All were landed in the AICM and then applied routine safety protocols and reviewed what happened.

While carrying out the investigation, sources quoted by Reforma explained that the pilot of Flight 794 reported the possible threat to 19:35 hours . Then, the plane returned and landed in the AICM around 8:05 p.m.

It is worth remembering that this has not been the first possible threat registered in aircraft from the AICM and not from the company. In December 2015 , an operation was carried out at Benito Juárez Airport after a false bomb threat on a Volaris plane. There was an intense mobilization in the AICM, the protocols were applied and the alert was discarded. 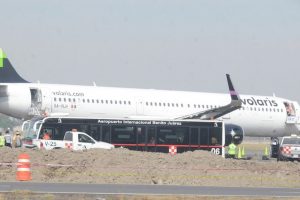