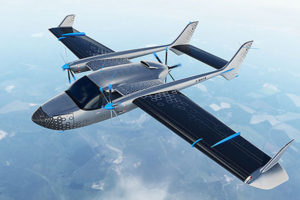 The French startup VoltAero started developing a hybrid aircraft with a distributed propulsion system. The propulsion system, which consisted of electric motors with pulling propellers, will be responsible for creating the driving force during takeoff and landing, while cruising flight will be provided by an internal combustion engine, which rotates the pushing propeller.

VoltAero hybrid aircraft was named Cassio 1. It is created according to a two-beam scheme. In the fore of the aircraft is planned to have electric motors with six-blade pulling propellers. These screws will have a small diameter. Electric motors are planned to use during takeoff and landing. In traditional aircraft, this is the least environmentally friendly and economical mode (especially take-off), since they require the engines to operate at full power and lead to high fuel consumption.

It is assumed that propellers of reduced diameter will create high-frequency noise, rapidly losing intensity with distance. In cruising mode, a pushing propeller in the rear fuselage will be connected via a reducer. It will be driven by a 170 kilowatt internal combustion engine.

In parallel with the internal combustion engine, another 150 kW electric motor will be installed. It will be used to quickly start the internal combustion engine during the transition to cruising flight mode, as well as to rotate the tail propulsion in an environmentally friendly flight or in the event of a failure of the main engine. A promising aircraft is scheduled to perform four. The developers are positioning it as a direct competitor to the four-seat single-engine light aircraft Cirrus SR22, one of the most popular aircraft in small aviation.

The developers expect that the first flight of Cassio 1 will take place in 2019. By 2021-2022, it is planned to complete the testing and certification of the aircraft and begin shipping the first aircraft to customers. In general, VoltAero believes that in high demand the pace of mass production of Cassio 1 will be up to 150 units per year.