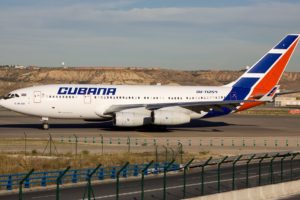 As explained in IFC, they delivered the IL-96-300 aircraft to Cuba already more than 10 years ago, and, according to the number of flight hours and the calendar service life, it already needed a comprehensive range of maintenance and upgrading of the flight navigation and radio communication equipment in accordance with modern requirements.

“According to the operating hours of the plane (the plane has already flown 19,500 hours), the routine maintenance in severe form presupposes a large amount of inspection of the airframe units, anti-corrosion treatment of the fuselage shell, and replacement of the components of the aircraft with the expired resource”, said Ilyushin Finance Co.

In addition, according to the agreement, in the course of the work, the aircraft factory checked the efficiency of all aircraft systems, replaced the old passenger compartment lighting with modern LED lighting, finalized the flight attendant call system, restored the interior panels of the passenger cabin of the aircraft, and also painted the outer surface of the aircraft. During the execution of the work, two engines will be replaced due to resource development. The aircraft factory has coordinated all the additional works with the representatives of the Cuban airline.

VASO performed these works since February 3 this year. At the end of last week after the completion of the whole complex of works IL-96-300 went to Cuba.

In total, for the period from 2006 to 2016, 14 aircrafts were delivered to the Republic of Cuba, including four Il-96 aircraft, two Tu-204 passenger planes, two cargo Tu-204 and six An-158 aircraft. Most of the planes are delivered on the terms of export interstate crediting. The volume of borrowings was 432 million USD for 11 years.