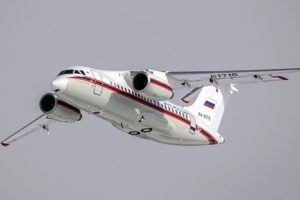 Voronezh Aircraft Production Association plans to close the program for the production and sale of An-148 aircraft.

At the same time, in the report for the Q2 2018, the aircraft manufacturer revealed the plans for the future indicating the production and sale of An-148 aircraft. In January-September of this year, the cost of sales of An-148 aircraft amounted to 1.4 billion rubles, exceeding the revenue from sales of these aircraft by 23%.

Among other things, the plans of the aircraft plant include the implementation of the program for the production of IL-96 aircraft of various modifications, the launch of serial production of IL-112V aircraft, the production of aggregates for SSJ 100, Irkut MC-21, IL-76MD-90A aircraft. Among the plans are also carrying out development work on the units for the IL-114 aircraft with subsequent launch of mass production, technical re-equipment for the manufacture of the IL-96-400M and IL-114 aircraft, the reconstruction of the Voronezh Aircraft Production Association airfield base and the creation of a dedicated technical section on the Voronezh Aircraft Production Association base, maintenance and development site for maintenance of An-148 and IL-96.

As previously reported, after the crash of the Saratov Airlines An-148 on February 11, 2018, which killed 71 people, the Russian Aviation prohibited the airline to operate flights of this type of aircraft, and later revoked the company’s certificate of operator. In the Russian Federation An-148 is operated by the airline “Angara”, a special flight squad “Russia”, the Emergencies Ministry and the Russian space forces.