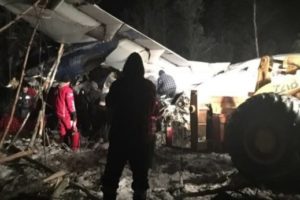 West Wind Aviation aircraft ATR 42-300 lost height and emergency landed on soft ground field in Canada. The aircraft with 22 passengers and 3 crew and climbing after takeoff from Fond-du-Lac Airport in Fond-du-Lac, Saskatchewan, but after technical problems started losing height. The pilot was pushed to make emergency landing on on soft ground field near the airport. Fortunately all the people on board survived, but many of them received serious injuries and were transported to the hospital.

There was no explosion or fire after the crash. A number of people have suffered injuries, some serious enough to require air ambulance services. The airplane fell over a wooden area over the trees, suffering serious damages.

Royal Canadian Mounted Police reported all occupants have been accounted for and have been taken to hospitals. The Canadian TSB have dispatched investigators on site. The root cause of the accident will be estimated in further days.

Environment Canada’s forecast for Fond-du-Lac Wednesday the night of the accident called for cloudy conditions with a 30% chance of flurries and a temperature low of –19°C.

The ATR 42 is a twin-turboprop, short-haul regional airliner developed and manufactured in France and Italy by ATR (Aerei da Trasporto Regionale or Avions de transport regional), a joint venture formed by French aerospace company Aerospatiale (now Airbus) and Italian aviation conglomerate Aeritalia (now Leonardo S.p.A.). The number “42” in its name is derived from the aircraft’s standard seating configuration in a passenger-carrying configuration, which typically varies between 40 and 52 passengers.