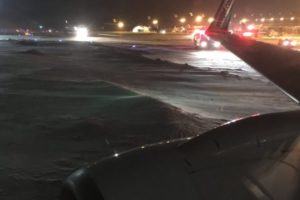 WestJet aircraft Boeing 737-700 slides off the taxiway at Edmonton airport in Alberta, Canada. The airplane was taxing to take off en route to Victoria in British Columbia province with 77 passengers and six crew onboard, but due to icing of the runway the plane slid off and stopped in soft ground. None of the people on board were injured and all were taken back to the airport terminal by bus. They were rebooked for other flights to the airport of destination.

An airline spokesperson says they suspect the very icy conditions are to blame for the incident. They notified Transport Canada, who they say is not going to investigate.

The operations of the airport were not seriously affected during the accident.

The bad weather in vicinity and icy taxiway were the main reasons for the incident.