The collective imaginary often visualizes the Big Bang as a bright flash of light that appears in a sea of ​​darkness. However, that is not an accurate image.

The beginning of everything was not an explosion in empty space.

The Big Bang was an expanding space full of energy in itself that ended up creating from the bluish white blink of the young stars, to the deep red glow of the hydrogen clouds that we can see today.

And also what we cannot observe with our eyes, such as the flashes of X-rays and gamma rays, the powerful bursts of radio and the dim and always present glow of the cosmic microwave background.

The cosmos is full of visible and invisible colors, old and new. But which was the first of all?

The universe began 13.8 billion years ago with the aforementioned Big Bang. In its first moment, it was denser and hotter than it would ever be again.

In fact, the temperatures were so high that the light did not exist. The cosmos had to cool 10 seconds for the photons to appear.

In turn, the protons and neutrons had cooled in the nuclei of hydrogen and helium, and the space was filled with a plasma of nuclei, electrons and photons.

“At that time, the temperature of the universe was approximately one billion Kelvin,” they explain on Phys.org echoing “Universe Today.”

And there was light, but there was no color. Because color is something we can see, or at least some kind of eyes could see. During the time of the photons, the temperatures were so high that the light could not penetrate the dense plasma.

The color would not appear until the nuclei and electrons cooled enough to bind the atoms, and that still took 380,000 years.

By then, the observable universe was a transparent cosmic cloud of hydrogen and helium 84 million light years in diameter. All the photons formed in the Big Bang were free to flow through space and time at last.

This is what we now see as the cosmic microwave background: the glow of light from a time when the universe could finally be seen.

Over billions of years, the glow has cooled to the point that it now has a temperature below 3 degrees above absolute zero.

When it first appeared, the universe was much warmer, around 3,000 Kelvin. The early universe was full of a warm and bright glow.

The primitive universe had an almost uniform temperature everywhere, and its light had a wavelength distribution known as the black body, which absorbs all the light and all the radiant energy that falls on it.

A black body of approximately 3,000 K would have a bright orange-white glow, similar to the warm light of an old 60-watt bulb .

However, humans cannot see colors very accurately. What we perceive depends not only on the real color of the light, but also on its brightness and whether our eyes are adapted to the darkness.

If we could return to the moment of that first light, we would probably perceive an orange glow similar to the firelight.

Over the next hundreds of millions of years, the faint orange glow faded and reddened as the universe continued to expand and cool.

Finally, the universe melted back to black.

After about 400 million years, the first bright blue-white stars began to form, and a new light appeared. As the stars and galaxies appeared and evolved, the cosmos began to acquire a new color.

In 2002, Karl Glazebrook and Ivan Baldry calculated in a study published in the “Astrophysical Journal” the average color of all the light we see today from stars and galaxies to determine the current color of the universe.

At first they thought it was a “pale turquoise”, but they ended up correcting their results by incorporating more data and it turned out to be a pale tan similar to the color of coffee with cream. They called it “Cosmic latte.”

But even this color that now dominates our universe will only last for a while. As the big blue stars age and die, only the bright red glow of the dwarf stars will remain.

Finally, after billions of years, even its light will vanish, and the universe will again become a black sea plunging into darkness.

But for now, we have the “cosmic latte”. You will no longer see a coffee with milk, right? 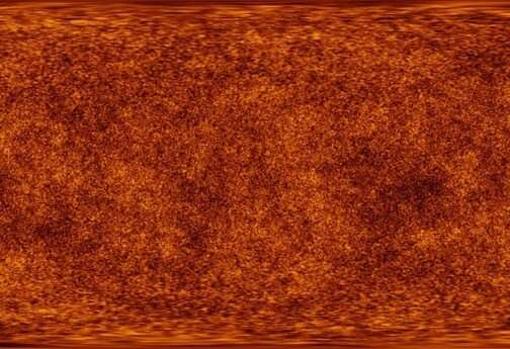