The image surprised many this Tuesday in Venezuela.

A large rocket launcher vehicles appeared parked on the highway connecting Caracas with its airport, blocked by soldiers coinciding with the return of the opposition leader Juan Guaidó to the country from Lisbon.

The next day, similar equipment was seen at the La Carlota air base , in the center of the city. Several users on social networks sent similar photos that they located in Puerto Cabello, one of the most important coastal towns.

It is an unusual picture that caught the attention of many, who launched themselves to comment on the networks.

Also that of Andrei Serbin Point, international analyst and director of the Cries thinking center. “This deployment is very rare,” he said.

What is it about?

Serbin identified the vehicles shown in the photographs as part of a BUK M2E group, a Russian-made medium-range anti-aircraft defense system that the Venezuelan army has.

Two other military sources consulted by BBC Mundo distinguished in the photographs vehicles of an S-125 Pechora , another interception group exported by Russia, older than the M2E.

The BUK was the weapon that shot down a Malaysian civil aircraft in 2014 that flew over Ukraine, then plunged into a war, causing the death of the 298 people on board.

Both the BUK M2E and the S-125 Pechora are attached to the Comprehensive Aerospace Defense Command and together with the most sophisticated and advanced S-300, the bulk of the anti-aircraft response means of the Bolivarian National Armed Forces (FANB).

Although Venezuela also has RBS 70 systems, Swedish-made, and the French Mistral, these are much more modest and not comparable in capacity and importance to the BUK, Pechora or S-300, experts say.

The Igla-S, which abound in the FANB, are also Russian, but these are individual portable missile launchers, while the BUK, the S-125 and the S-300 are made up of several vehicles and radars.

Why does Venezuela have them?

Russian anti-aircraft systems were delivered to Venezuela between 2011 and 2014 .

According to data from the International Institute for Peace Studies in Stockholm (Sipri), Venezuela received three units from the S-300, three from the Buk M2A and eleven from the S-125 .

The S-125 is no longer manufactured. Venezuela acquired used equipment that was modernized before delivery.

Buying these and other equipment were the result of the alliance of the then President Hugo Ch to time with his Russian counterpart, Vladimir Putin , with whom he built a relationship with the one who wanted to counter US dominance in Latin America and still remains .

Fruit of this was also the incorporation into the arsenal of the Chavista Venezuela of the Su-30Mk2 fighters, according to experts, a model capable of competing with the most advanced NATO fighter jets thanks to its firepower, maneuverability and performance.

During his recent visit to Caracas, Russian Foreign Minister Sergey Lavrov reaffirmed that military cooperation is a priority field in relations between the two countries.

“It is important to develop our military-technical cooperation capacity to increase the defense capacity of our friends against these threats from outside,” said Lavrov.

It was interpreted as a message to the United States, which recognizes Guaidó as interim president of Venezuela and has not ruled out an intervention to evict Nicolás Maduro from power in Venezuela.

In recent months several planes with Russian personnel landed in Caracas, although their mission was never officially reported.

The acquisition of these equipment involved the collaboration of another preferred military partner, Belarus, where the Venezuelan military received the courses to handle them.

How effective they are

“We really talk about systems that would embarrass the most modern air force and that no other Latin American army has, ” says Serbin Point.

“The United States did not want Russia to sell them to Syria, which gives an idea of ​​their potential,” the expert adds.

With the ability to track more than one hundred targets simultaneously, the S-300 is considered in the world of military industry as one of the most complete and advanced long-range surface-to-air missile systems .

Something older, the BUK M2E is still valued. 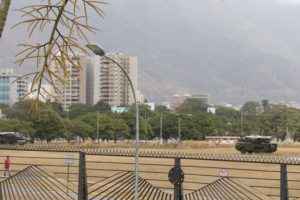 But experts doubt the operability of the units that Venezuela bought. “In recent years Venezuelans have suffered the defection of a large part of the staff that could operate them,” Serbin Point said.

According to a Venezuelan military command that asked not to be identified, “now they are not optimal due to carelessness, and lack of planning and economic resources . “

It is also believed that Venezuela’s endowments are more modest than those handled by the Russian armed forces.

An S-300 system is usually composed of four heavy vehicles. One of them is equipped with a long distance radar and a second one has a radar for tracking targets.

A third command vehicle receives and processes the radar information. Finally, the missile shuttle is mounted on a room. 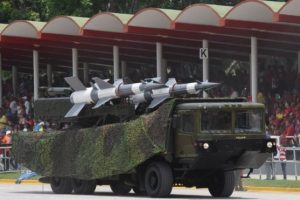 However, in Caracas these days have not seen any of these complete groups.

“A battalion usually consists of six groups with these four vehicles, while in the case of Venezuela it is estimated that it only has groups of a maximum of three,” Serbin Point says.

On August 5, 2018, a drone exploded while Maduro presided over a military parade in Caracas and the year before, in 2017, a group of police officers attacked the headquarters of the Supreme Court by helicopter.

On April 30, 2019, Juan Guaidó appeared accompanied by a group of armed guards next to the La Carlota base and announced the “end of the usurpation” of Maduro, beginning a day of violence between groups of government detractors and The security forces.

Serbin says: “We will probably never know what happened this week, but it is possible that the intelligence had some information that made a similar episode be feared.”

Although the coincidence with the return of Guaidó to Venezuela after an international tour in which he obtained the support of, among others, the United States, and the military deployment that closed the accesses to the airport in the hours prior to his arrival, led many to suspect an alleged intimidating intention, including the military man who did not want to give his name.

“There was no operational reason. It was done to send a message to the population .”