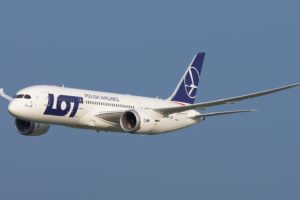 Windshield of LOT Polish Airlines plane Boeing 787-800 cracked in flight from Warsaw (Poland) to Toronto (Canada). The aircraft was on 90 nautical miles from Oslo in Norway, when the crew reported that first officer’s windshield had cracked. They contacted the safety services and maintenance team and decided to return in Warsaw for repairs and inspection, instead of continue the risky flight. The aircraft returned in Poland and landed safely 90 minutes later.

All the passengers were accommodated in a hotel and the flight was postponed for next day.

The aircraft was inspected and repaired by the maintenance team. They found that there are minor scratches at the inner side of the right hand windshield. The defected part was replaced and after 20 hours the aircraft was allowed to return in service and resumed the flight to Toronto.

There were no reported injuries among the people and crew. The investigation for the accident is under way. The inspection of the aircraft did not showed any deficiencies.

Boeing 787 Dreamliner is an American long-haul, mid-size widebody, twin-engine jet airliner. Its variants seat 242 to 335 passengers in typical three-class seating configurations. It is the first airliner with an airframe constructed primarily of composite materials. The 787 was designed to be 20% more fuel efficient than the Boeing 767, which it was intended to replace. The 787 Dreamliner’s distinguishing features include mostly electrical flight systems, raked wingtips, and noise-reducing chevrons on its engine nacelles.