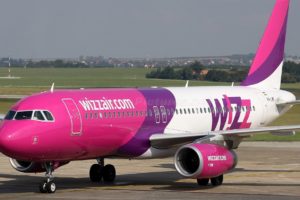 Wizz Air doubles operations in Ukraine in 2018. According to the press release of the largest low-cost airline in Central and Eastern Europe, it will add the third aircraft Airbus A320 to its Kyiv base at the Kiev airport Zhulyany from April 2018. During the same month, Wizz will launch two new routes from Kiev to Lisbon and Tallinn, and will increase the frequency of flights in the most popular destinations – 11 additional flights a week as part of the summer schedule from Kiev next year.

“Tickets for all new flights are already on sale since July 12 at prices ranging from 429 UAH”, says the statement of Wizz Air.

The new aircraft will support the service on the two new routes starting on 19 April 2018 from Kyiv to Tallinn and Lisbon, with WIZZ’s Kyiv-Lisbon route being the only direct connection between the two capitals.

Operating in Ukraine continuously since 2008, today’s announcement brings WIZZ’s investment in its Kyiv base to almost 300 million USD. In 2018 the company will offer in total more than 1.5 million seats on its Kyiv routes, representing an increase of 97% year-on-year.

Earlier this week, the low-cost airline Ryanair announced the cancellation of their planned entrance to Ukraine. In Ryanair stated that the airport Borispol has violated the agreement reached in March this year, the Ministry of Infrastructure with airport officials.