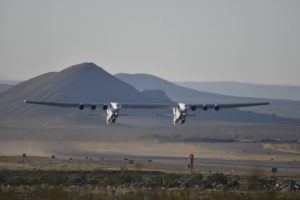 World’s largest aircraft Stratolaunch Model 351 completed its first flight on April 13. The two-body six-engine aircraft is a platform for carrying out aerial launches of spacecraft using special launch vehicles. The aircraft has a wingspan of 117 m and a length of 73 m. The maximum take-off weight is about 550 tons. The aircraft is equipped with six Pratt & Whitney PW4000 turbojet engines. Estimated take-off distance with a full load is 3,700 m. The maximum flight distance of an airplane with a full load is 2,200 km.

The twin-fuselage high-wing configuration enables the Stratolaunch platform to accommodate and deploy launch vehicles more safely in a central position. Each fuselage is 73 m in length and they are 29 m apart.

The aircraft took flight at 6:58 PDT on the runway in Mojave, California. The plane, piloted by Evan Thomas and Chris Guarente, flew for 149 minutes, reaching a maximum speed of 165 KIAS before landing safely at 9:27 PDT.

The Stratolaunch aircraft is designed to carry rockets high into the atmosphere, providing a head start in altitude and velocity for satellites going into orbit around Earth.

Stratolaunch Systems plans that the aircraft will launch the first satellite in 2020 already. The roll-out of the aircraft was carried out in 2017, and the project itself was first introduced back in 2011.